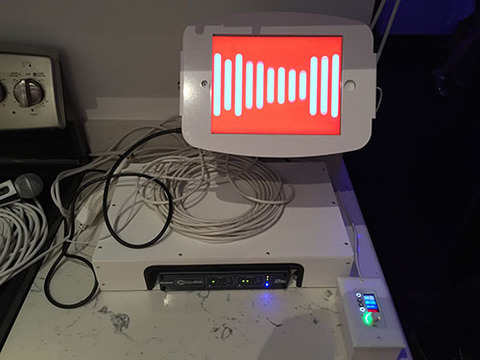 NEW YORK, New York — The SoHo is one of Manhattan’s newest upscale event spaces, an authentic penthouse SoHo loft that provides a full range of catering, DJ and other services for all types of affairs. Celebrating its grand opening last July, The SoHo features an in-house music system operated by a BSS Audio Soundweb Contrio wall controller that makes music selection easy for The SoHo’s staff.

Ian Hoffer, president of New Jersey systems integrator Aurora Sound & Light Design chose the Contrio EC-4BV Ethernet wall controller and a BSS Audio BLU-50 signal processor with BLU link connectivity to serve as the operational heart of The SoHo’s music system. “We needed a controller that would be absolutely simple to use per the owner’s wishes and discreetly blend into the space’s beautifully appointed décor,” said Hoffer. The Contrio EC-4BV was perfect for the application.”

The BSS Audio Soundweb Contrio EC-4BV features a push/rotary encoder, an encoder ring, four buttons and a color LCD screen that can display custom text and graphics. Available in black or white, the EC-4BV connects to a system via Ethernet and can be custom-configured using the

Music for The SoHo events is furnished via an iPad or a visiting DJ, and a mic is also provided. “At first the owner was going to go to a music store and buy a mixer, but since the space is rented to all kinds of people for all kinds of events, I advised him that a mixer would be impractical. People needed something that would be totally simple to use, and the BSS Contrio turned out to be ideal.”

Hoffer configured the EC-4BV to be able to switch between an iPad, DJ and mic and also mix the inputs together if required. A fourth button is programmed to select the mic only – a user only has to tap the “Mic Solo” button on the controller. The Contrio is connected via an Ethernet cable to a PoE (Power over Ethernet) power injector, which feeds into a switch and the BSS Audio BLU-50.

“This was the first time I have ever installed a BSS Audio Contrio product and I have to say I really like the fact that although it’s simple to use, the LCD screen and configurable buttons enable it to be customized to a high degree. A cool feature is the illuminated ring around the volume knob that acts as an input meter so you can see what your signal is doing.”

Hoffer found the Contrio wall controller to be a high-value, flexible solution. “It worked out very well for The SoHo and the facility owner is very happy.” Hoffer concluded, “I can absolutely see myself using it for future projects as a cost effective professional-grade option for audio control.”