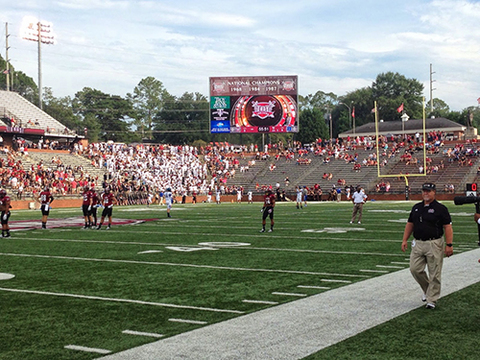 Veterans Memorial Stadium now features a new Daktronics scoreboard in the corner of the north end zone, which is topped with three arrays of JBL VLA loudspeakers. Each array features five loudspeakers, comprised of a combination of VLA301H, VLA601H and VLA901H models. In addition, three JBL PD5200 loudspeakers are used for downfill. In under-balcony and concourse areas, 12 CBT70J column speakers provide delay fill.

According to Dan Eckert of Daktronics, while the requirements of the audio system were not unusual by stadium standards, they were still very specific. “The stadium needed high output and even coverage across all seating areas,” he said. “We also needed loudspeakers that could make the 500-600-foot throw to the far side of the stadium and the VLA loudspeakers have that ability.”

In addition, the press box in the stadium posted an acoustics challenge. “We had to contend with the press box on one side of the stadium, which created some reflections. But we were mostly able to steer the VLA loudspeakers away from those reflecting areas.” said Eckert said. “We have used VLA in past projects and are very comfortable with their performance.”

“We have had great experiences with the I-Tech HD amplifiers and they work very well together with the BSS processing,” Eckert added.