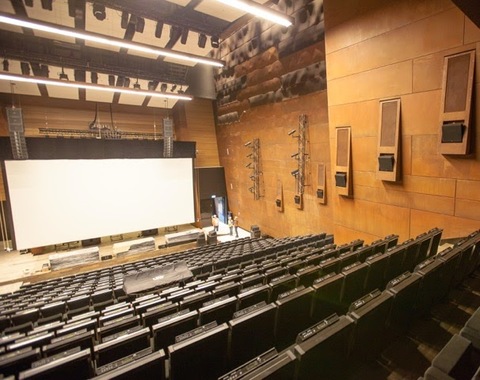 GDANSK, Poland– The new European Solidarity Centre has opened next to the famous Gdansk shipyards in Poland. Built over five stories, it has been designed to give the impression of walls cracking and tilting, and is covered in rust-colored sheet metal resembling a ship’s hull. Conceived as an homage to former president, Lech Walesa, it represents a symbol of the peaceful victory of the Solidarity (NSZZ Solidarność) movement of which he was leader. Providing a fully integrated, world-class audio system, ESS Audio provided a variety of solutions from the HARMAN Professional portfolio.

The permanent exhibition at the European Solidarity Centre now occupies an area of ​​almost 3,000 square meters of the building’s first and second floors, the main theme being the activity of the trade unions that led to democratic changes across Central and Eastern Europe. The conventional exhibition merges with the latest multimedia solutions, in a series of presentations that includes photographs, film archives, documents and maps, as well as multimedia presentations.

The principal requirement in the main multifunctional hall was to transmit microphone signals at conferences, meetings and seminars while the overall digital system would play multimedia content, background music and so on.

Since cinema is among the media hosted in the multipurpose hall, ESS Audio specified a JBL cinema surround sound system. This comprises three JBL 3732 3-way loudspeakers, two JBL 4642A subwoofers and 19 JBL 8340A surround loudspeakers, all driven by Crown DSi 2000 amps. The main full-band loudspeakers and subwoofers are set on trolleys, so they can be moved away when not in use.

All this equipment is available for use in the main hall, as well as the stage in the foyer, according to requirements.

Meanwhile, the exhibitions rooms have been equipped with a distributed sound system, consisting of 30 JBL Control 24CT Micro Plus-Black and four JBL Control 25T ceiling and wall loudspeakers. All are driven by Crown CDi1000 amps and controlled by two Soundweb London BLU-100 processors.

As a cultural, educational and historic research hub the European Solidarity Centre now has the high performance, versatile technical infrastructure that it needs. “The decision for every component chosen was based on its performance guidelines,” said ESS Audio’s Witold Karalow. “The systems chosen by us from the HARMAN catalog have been designed to meet all customer requirements.”