Great Sound Is In the Can At Pepsi Center With HARMAN’s BSS Audio, Crown and JBL Professional 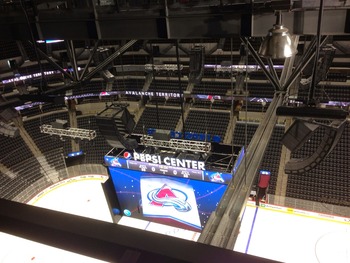 DENVER, Colorado — Known to Denver denizens as “The Can,” the 20,000-plus capacity Pepsi Center is home of the NBA Denver Nuggets, NHL Colorado Avalanche and the National Lacrosse League Colorado Mammoth, and is also host to concerts and special events. The arena opened in 1999 and has been in continuous use since then – including its original sound system. When the Pepsi Center decided to upgrade to a massive new state-of-the-art scoreboard in 2013, management determined it would also be a good time to replace the venue’s audio system from top to bottom.

LVW CEO Rusty Griffith pointed out, “The fact that both firms had a history with the venue made us the logical choice – we were under a tight timetable on this project and were given seven weeks to complete a job that would usually take over three months.” LVW was given the go-ahead in spring 2013 and Griffith and his crew had to be finished in time for the start of the Pepsi Center’s fall line-up. “We worked day and night all summer long.”

LVW and WJHW chose a JBL loudspeaker system comprised of six columns of 10 JBL VLA901-MF-16 line array loudspeakers, hung around the perimeter of the arena. The VLA901-MF-16 was chosen for its ability to provide high-volume sound reinforcement at throw distances beyond the reach of traditional loudspeaker designs. Each loudspeaker is equipped with dual 15-inch woofers, dual 8-inch cone midrange compression drivers and three 1.5-inch high-frequency compression drivers. In addition, four JBL ASB6128V dual 18-inch subwoofers are hung directly behind the each of the 10 main line arrays. The loudspeakers and subs are powered by 44 Crown I-Tech 4x3500HD amplifiers, plus 11 Crown CTs 2000 amps to drive additional loudspeakers at the back of the arena.

“JBL’s VLA line has been a strong choice for us in arenas for the past few years. The overall sound quality is excellent and they provide higher output and increased intelligibility,” explained Mark Graham, Associate for WJHW. “We paired the VLA loudspeakers with the 4-channel Crown amplifiers, which we chose based on previous successes and the overall strong reliability reputation of the I-Tech HD line.”

The system is networked using four BSS Audio Soundweb London BLU-806 signal processors and six BLU-326 I/O expanders, both Dante-enabled products. Control for the entire Pepsi Center audio system is provided by HARMAN’s HiQnet Audio Architect™ software, a common control platform for all devices from microphone to loudspeaker. “Using Audio Architect was a big deal,” Graham noted, “considering how new the software was at the time we did this installation. It paid off though – it’s a great way to control the system and its audio management capabilities are extensive. The venue’s ownership was very pleased when he saw we had the capability to put everything onto one software platform.”

“This installation turned out to be fantastic in terms of equal coverage to every area of the arena,” said Griffith. “The performance of the VLA loudspeakers and the subwoofers is so consistent that there’s very little seat-to-seat variation. The Pepsi Center project turned out to be one of the best examples of this I have heard.”

In addition to performance, one of the main benefits of choosing HARMAN according to Griffith was the support LVW and WJHW received from the company throughout the project. “We looked at various manufacturers’ solutions. I’ve always liked JBL and the HARMAN product line for its excellent sound quality and solid engineering and the support they provide – especially on this project, given the time crunch we were under – is second to none.”

In addition to its capability as a full stand-alone sound reinforcement system, the new system is designed so it can be used along with a tour sound system for concerts and other events. If a band or a convention comes to town and their rental system doesn’t have enough coverage, they can readily connect to the Pepsi Center system to supplement the audio.