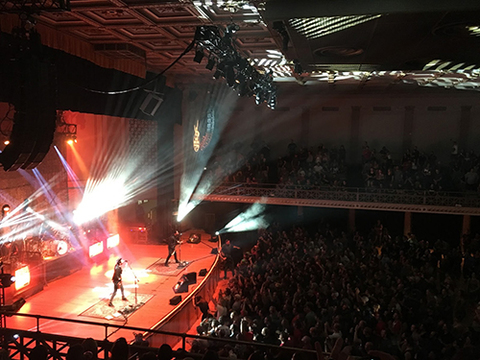 NASHVILLE, Tenn.—Nashville-based audiovisual production company CTS recently updated the War Memorial Auditorium with a complete sound and lighting solution by HARMAN Professional Solutions, including a JBL Professional by HARMAN VTX Series system and a full array of Martin by HARMAN RUSH fixtures. With construction dating back to the 1920s, the historic building in downtown Nashville hosts a diverse range of events, from major concert tours to weddings to corporate seminars. The new HARMAN solution enables the War Memorial to provide tour-grade sound and lighting for national music acts, and provides the flexibility they need to accommodate any type of performance or event.

Over the course of 90 years of operation, the building has never been equipped with a permanent PA or lighting system. The auditorium’s historic architecture makes it very difficult to load equipment in and out, since there is no loading dock and the only doors to the facility are followed by multiple sets of stairs. In order to save labor costs and reduce the strain on the staff, management made the decision to install permanent audio and lighting systems.

“There were some weight constraints due to the structure of the building, so we needed a lightweight system that could deliver powerful output and maintain even coverage throughout the venue,” said Mike Taylor, Vice President of CTS. “The VTX V20 system was the perfect solution for the building, and it took away a lot of the constraints we were facing. It’s lightweight and has more than enough power, plus it provides true 110-degree horizontal coverage. With other products, we might have had to add extra line arrays to get coverage.”

“The War Memorial auditorium is a very beautiful venue, but the acoustics were definitely difficult due to lots of hard parallel surfaces,” said Jon Schwarz, Audio Design and Production Manager at CTS. “The VTX system has extremely even coverage on the horizontal plane, so there were less elements for us to tune. The SMAART integration in Performance Manager 2.1 proved extremely useful, and the entire installation was really smooth. From the flying hardware to the amplifiers to the software within the system, it’s a very integrated and turnkey system to deploy. From a functionality, power and affordability standpoint, the JBL VTX line is a game-changer for the market.”

“They needed a lighting system that could be used for a wide range of events—from a national touring musical act to a safety meeting,” said Taylor. “The RUSH line is incredibly versatile, and all of the fixtures we chose are multi-functional, which gives them great value for their investment.”