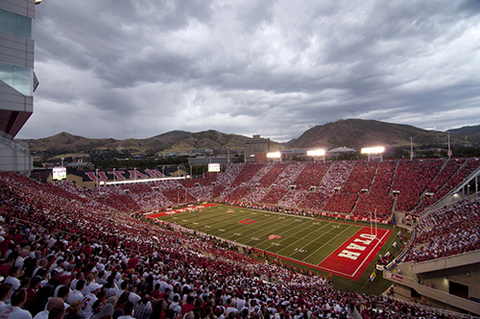 “The university was really forward-thinking in terms of reducing the noise impact on the community while also delivering high-quality sound, and they were willing to do what it took to achieve both,” said Jack Wrightson, Principal at WJHW. “Column arrays, as we’ve used before, wouldn’t work in this stadium because the throw distances were too far. They wanted a bigger and more impactful system, so we really had to create a one-of-a-kind solution to make it all work.”

Rice-Eccles is a large, single-bowl stadium with nowhere to hang speakers other than six light towers. WJHW developed a concept that involved adding 17 50-foot speaker poles around the upper rim of the stadium to mount the loudspeakers. Weight and wind were major concerns from a structural engineering standpoint, and they wanted to use the smallest speakers possible while still delivering the required output. WJHW system designer Michael Murph selected new JBL Precision Directivity Series PD743i-215 speakers for their compact size and full-bandwidth output. For the light towers, they selected JBL Variable Line Array (VLA) Series loudspeakers. The entire system is powered by Crown DriveCore Install Series amplifiers.

“When you’re putting something on top of a 50-foot pole, the weight and surface area to the wind are really important,” said Wrightson. “We needed compact speakers with high directivity, and they also needed to be full range, because we didn’t want to attach a separate woofer box to the pole. The PD700i Series speakers are a combination of reasonable weight and a small package, which was important for the pole mounting. They also enabled us to get the directivity we wanted out of the mids and highs without having to add a separate woofer box.”

Once the speakers were installed, Performance Audio and WJHW spent three days adjusting the DSP, and tuning and balancing the massive system. The audio teams were up against a tight deadline to complete the project—the university needed the entire system ready in time to host the 2016 Nitro World games, a major action sports competition. To complicate the process even further, they had to work in the middle of the night to avoid interfering with a municipal train line that runs behind the stadium. By working with HARMAN Professional Solutions, Performance Audio and WJHW were able to streamline the entire installation process, quickly deal with any unexpected challenges and complete the project on schedule.

“One of the great things about this project was the integration and communication between the HARMAN brands,” said Jake Peery, Install Manager and Systems Designer at Performance Audio. “For example, if a Crown amp and a JBL speaker needed to be optimized, the HARMAN team members were willing to reach out and work with each other to find a solution for us. It saved us a ton of time when it came down to putting in crossover settings and the technical side of the install. We were also able to work with JBL and Crown to get some really solid speaker presets. It was a really large project for us, and having that partnership gave us a ton of confidence—I wouldn’t want to do it any other way.”